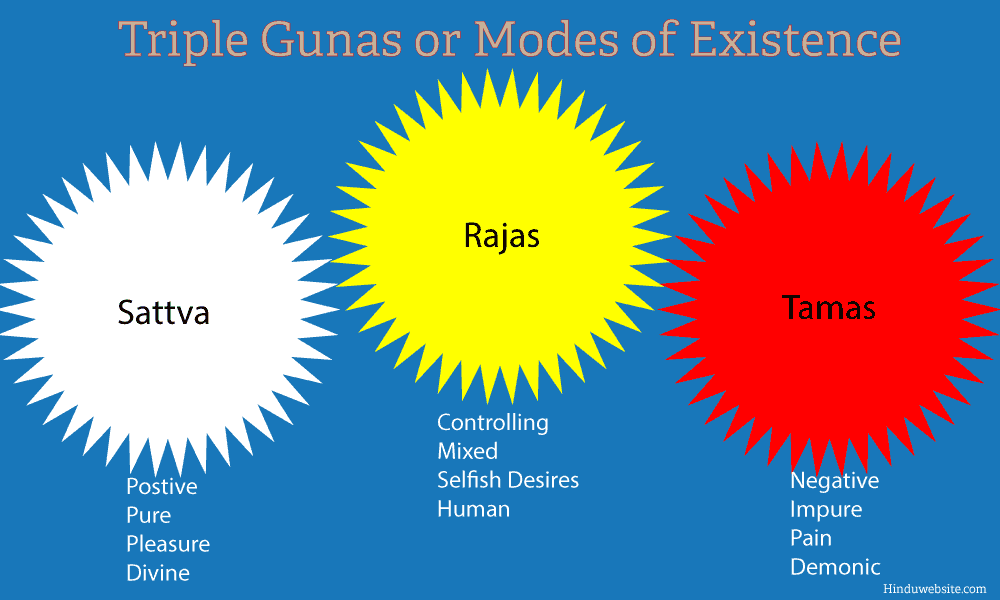 “Summary: “Guna” literally means property, quality, merit, virtue, etc. In philosophy it denotes a property, mode or propensity of things and beings. The gunas are primarily responsible for our predominant traits, actions and modes of behavior. In this essay we present the importance of gunas and their influence upon human behavior according to the Bhagavadgita.

According to the Bhagavadgita, the gunas (the primary qualities or modes of Nature) are three in number, sattva, rajas and tamas. They exist in all, including humans, in various degrees of concentration and combination. They also exist in all objects and natural products. Hence, even the food which we eat is important if we want to cultivate good behavior. Depending upon their relative strengths and ratios, the gunas determine the nature of things, beings, their actions, behavior, attitude and attachments and their involvement with the objective world in which they live. The primary purpose of the gunas in the living beings is to create bondage, through desires for sense objects, which lead to various attachments with them and which in turn keep them bound to the world and under the perpetual control of Prakriti (7.13).

The role of gunas in creation

The gunas are born from Prakriti. The Self does not reside in them but they reside in him (7.12). Before creation, they remain inactive and in a state of perfect balance in the Primordial Nature (mula Prakriti). When their balance is disturbed, creation sets in motion, and the diversity of objects and beings come into existence, each possessing the triple gunas in different proportions. The admixture (panchikarana) of the gunas and the elements (mahabhutas) is well explained in the Paingala Upanishad.

According to the Bhagavadgita, God is the real Enjoyer. He brings forth the entire creation for his joy (ananda). It is Purusha only who, seated in Prakriti, enjoys the qualities produced by Prakriti. The gunas are responsible for the diversity of nature. Because of the gunas (qualities) only the division of reality and unreality arise (13.21). When the gunas are manifested in creation, the individual souls come under their influence and begin their onward journey into the world of matter and death.

God (Isvara) does not act under the influence of any of the three. He is made up the Purest Sattva (suddha sattva), which is not of this world. Among the gods, Brahma has the predominance of rajas, Vishnu the predominance of sattva and Shiva the predominance of tamas. However, all the three gods are pure beings (shivam). They are not bound to them or to Nature. For the purpose of creation and the order and regularity of the worlds they manifest the gunas to perform their obligatory duties while they themselves are transcendental.

How the gunas influence behavior

The gunas are responsible for the behavior and natural propensities of all living beings. Human beings are also subject to their influence. Under their control people lose their ability to discern truths, their essential nature or their true Selves. They fail to see their oneness with God and the rest of creation or the presence of God amidst them (7.14). In the fourteenth chapter of the Bhagavadgita, Lord Krishna gives us a very detailed description and definition of the three gunas, which is summarized below.

How to know which quality is predominant in a person at a particular time? According to the Bhagavadgita when sattva is predominant, from all the gates of the human body radiate the illumination of knowledge, (14.11). When Rajas is predominant, greed, worldliness, striving for worldly ends and a penchant for selfish activities arise (14.12). With the increase of tamas, one can see the flourishing of darkness, inactivity, recklessness and delusion (14.13).

The gunas also influence faith, resolve, professional choices and nature of relationships. The division of human beings into the four categories is also due to the influence of gunas only. They govern every aspect of human life and the world in general. In the eighteenth chapter we come across a detailed description of how men with these three qualities act and behave differently and engage themselves in different religious and spiritual activities.

The resolution of the gunas

The purpose of such an elaborate description of these three qualities in the Bhagavad-Gita is not to encourage us to become sattvic or eliminate other qualities. Whether it is sattva or rajas or tamas, the gunas are part of Prakriti and responsible for our ignorance, delusion, bondage and suffering on earth. When they are active, we remain bound to one thing or another. We cannot be free, until they are fully resolved.

Therefore, the Bhagavadgita suggests that we should try to transcend them rather than cultivate them. By knowing the nature of the three gunas and how they tend to keep us in bondage and illusion, we should become wiser and strive to transcend them. Sattva is purity and beneficial. However, for those who strive for liberation, even cultivation of "sattva" should be not an end in itself for sattva also binds us to the duality of pleasure and pain. Sattvic people want to enjoy pleasure and avoid pain. They are pious and knowledgeable but prefer leading a life of luxury and comfort. Thereby, they engage in desire-ridden actions and become bound. Even though it is pure, sattva is but an instrument of Prakriti, which is meant to serve its ends by keeping us bound to the worldly life under the sovereign control of its sovereign master. Hence, one may cultivate purity (sattva) to suppress the other two, but in the end must rise above all the three and become stabilized in equanimity, sameness, and oneness of the Self. One should go beyond the three gunas to attain immortality and freedom from birth, death, old age and sorrow (14.20).

The qualities of a person who transcends the gunas

What are the qualities of the person who has transcended the three gunas (guna-atitah)? How does he behave, and how does he truly achieve it? The Bhagavadgita answers these questions also. When a person overcomes the three gunas, he neither likes nor dislikes purity light, passion and delusion, which are the predominant modalities that arise from the gunas namely sattva, rajas and tamas respectively. He does not detest them when they are present nor desires them when they are absent (14.22). He remains indifferent, undisturbed by the gunas, knowing that it is the gunas which are acting in all beings but not the Self which is present in them (13.23). Therefore, he remains alike in pleasure and pain, stable and equal towards a lump of earth or gold, the pleasant and the unpleasant, criticism or praise, honor or dishonor, and friend or foe. Since he rises above the gunas, he does not take sides in any dispute, show any favor or preference for the dualities of life and renounces the ambition and the initiative to perform tasks (14.24-25).

The practical applications of the gunas

A good understanding of the gunas can help you make wise decisions and remain on the right side of life. For example, the Eightfold Path of Buddhism, the Ashtanga Yoga of Patanjali, the rules and restraints for novices and advanced practitioners in Jainism and Buddhism are meant to cultivate sattva or inner purity, without which the mind cannot be stabilized in contemplation or in mindfulness. Cultivation of purity is at the root of all spiritual traditions of ancient India. In today’s world, where tamas and rajas predominate, it is even more important. Apart from spirituality, knowledge of the gunas is also helpful in worldly life. The following are a few examples, where you may use the knowledge to safeguard yourself from potential problems.

In spiritual life, the knowledge of the triple gunas is imperative. A correct understanding of the three qualities of Nature is essential to overcome your bondage to earthly life and attain liberation. By knowing the distinction among the three gunas and by developing the quality or mode of sattva in abundance a person can purify his mind and body and experience peace and equanimity. Through desireless actions, selfless service, devotional worship, self-study, sattvic knowledge, sattvic speech, right discernment, sattvic faith, behavior and sacrifice he can increase sattva (18.4-22) and develop the divine qualities (daiva sampattih) which are enumerated in the sixteenth chapter of the Bhagavadgita to become a perfect yogi and earn the love of God. By performing his obligatory duties without any desire and attachment, offering the fruit of his actions to God, surrendering himself completely to him, fully devoted to him, and absorbed in him, he surely achieves liberation and union with the Supreme Self.