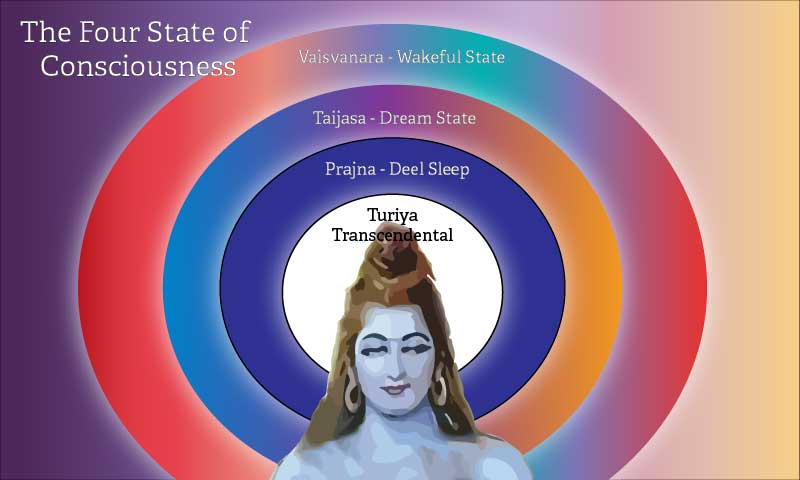 The Mandukya Upanishad belongs to the Atharvaveda. Although it contains only 12 verses, the Mandukya Upanishad occupies an important place in the development of Indian philosophical thought, following a commentary or Karika on it by Gaudapada, who is believed to be a teacher of Adi Shankaracharya's teacher.

Gaudapada's Karika on the Upanishad became the basis for the emergence of the Advaita Vedanta or the philosophy of monism, according to which Brahman alone is the truth and the rest is an illusion. The Upanishad deals with the symbolic significance of the sacred syllable Aum and its correlation with the four states of consciousness, namely the wakeful consciousness, dream state, the state of deep sleep or dreamless sleep and the state of transcendental consciousness in which all divisions and duality disappears and the self alone exists in its pure state, all by itself.

1. This syllable AUM is verily all this
This is the explanation about AUM:
The past, the present and the future are AUM,
And That beyond these three is also AUM.

2. Brahman is indeed all this.
This self in us is also Brahman.
And this self has four planes.

3. Vaisvanara is the first stage.
Wakeful, outwardly conscious,
With seven limbs and nineteen mouths,
He is the enjoyer of the gross objects.

4. Taijasa is the second stage.
Dreaming, inwardly conscious,
With seven limbs and nineteen mouths,
He is the enjoyer of the subtle objects.

5. In deep sleep, seeking no desires,
Dreaming no dreams, unified into
The mass of greater consciousness,
Full of bliss, enjoying bliss only,
Face turned towards Chetasa,
Is Pragna the third stage.

6. This is the Master of All, the Omniscient,
The Inmost Dweller and source of
Creation and destruction of all beings.

7. Conscious neither internally nor externally,
Nor either ways, neither ordinary consciousness,
Nor the greater and the deeper consciousness,
Invisible, otherworldly, incomprehensible,
Without qualities, beyond all thoughts,
Indescribable, the unified soul in essence,
Peaceful, auspicious, without duality,
Is the fourth stage, that self, that is to be known.

8. The same Atman is AUM among the syllables,
Each syllable in the word AUM is a stage. They
Are the letter A, the letter U and the letter M.

9. The wakeful Vaishwanara is the
First letter "A", being the first letter and
All pervasive. He who knows thus realizes
All his desires and becomes foremost too.

10. The dreaming Taizasa is the second
Letter "U", being superior and situated in
The middle. He who knows thus attains
Knowledge and children equally and none
In his family would be ignorant of Brahman

11. In the world of deep sleep, Pragna, is the
Third letter "M", being the limit and the end of
All diversity. He who knows thus is free from
All diversity and becomes one with the Self.

12. The fourth state is without parts and entanglements
Not bound to this world, It is auspicious and non-dual
Thus the form of AUM is verily the Self itself
He who knows thus enters into his own Self by himself.